LifeSplice's Product Pipeline
LSP-SCN8 is a novel SMO being developed to treat Dravet Syndrome, a catastrophic pediatric epilepsy. LSP-SCN8 directs splicing to reduce expression of SCN8A to a non-functional variant.  While most cases of Dravet are caused by a loss of function of SCN1A protein, decreasing SCN8A, located on excitatory neurons, alleviates seizures caused by SCN1A mutations by counterbalancing brain excitability.  LSP-SCN8 has shown the ability to dramatically reduce mortality in a mouse model of Dravet Syndrome.
LSP-GR1 is a novel SMO that potently and selectively reduces the expression of the "GluA1-flip" isoform in all cells of the central nervous system (CNS) including neurons (e.g., motor neurons) and white matter cells (e.g., astrocytes) after direct delivery in CSF.  Reduced levels of GluA1-flip directly reduce the level of certain AMPA receptors that are associated with excitotoxicity of cells and which are upregulated in epilepsy and ALS patients.  LSP-GR1 delays motor deficits, disease progression, and increases lifespan in an ALS mouse model and has been found to decrease seizures and has antiepileptogenic properties in a mouse model of epilepsy. 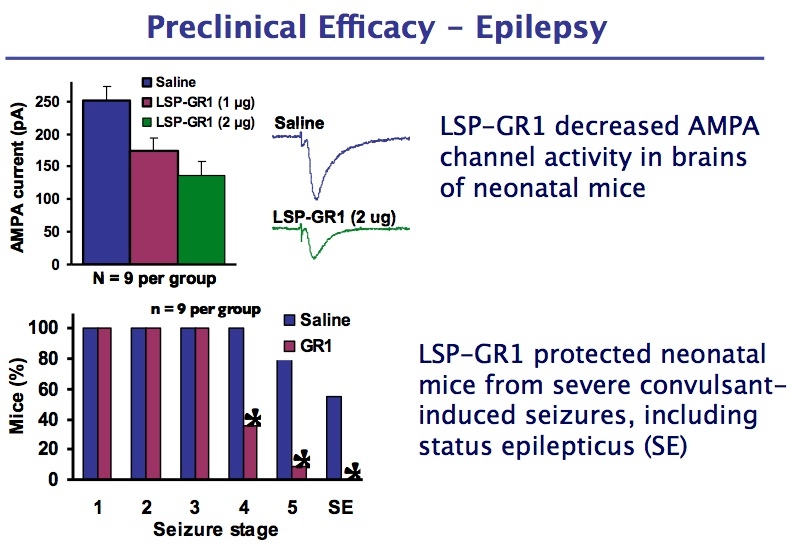